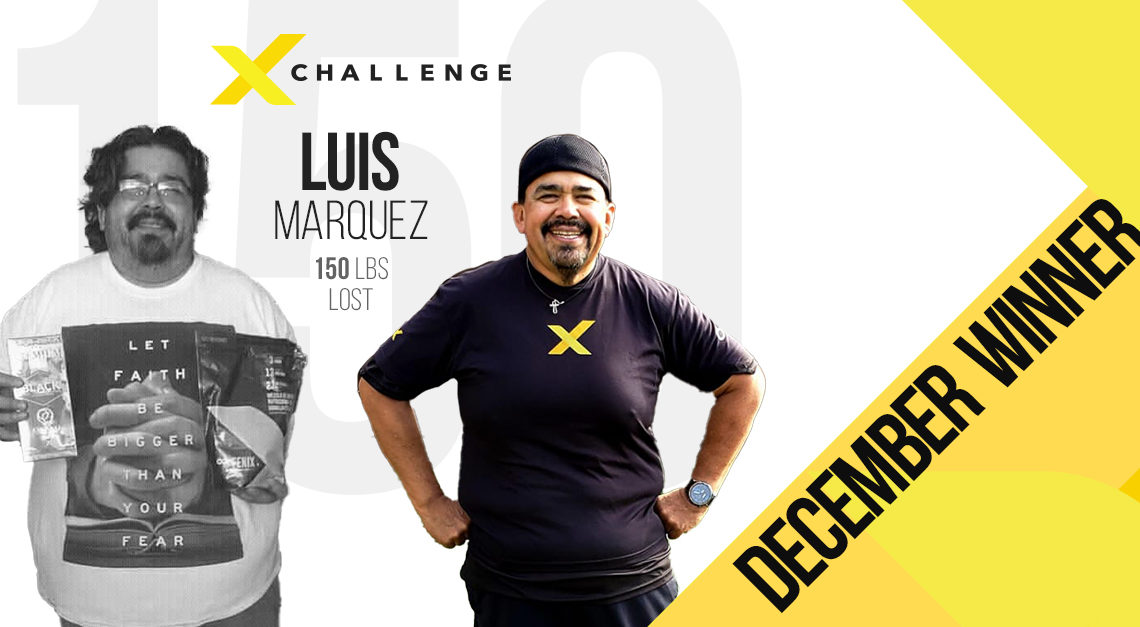 Luis Marquez is the 2020 winner of the X-Challenge, get to know his amazing transformation story.

Luis Marquez has lost over 150 pounds since he started his OGX journey in 2018. This is the time to discover the story of our December 2020 X-Challenge winner!

For Luis losing weight was an issue he had to struggle with since he was very little. from a young age, he was chubby, but by normal standards he did all the activities a kid would: play around, run, skate… But the pressure to be on a “normal” weight was there. He explains, “the first time I tried to lose weight was when I reached 120 kilos, and applied myself and managed to lose 31 kilos on that occasion, I saw could, but time after, I recovered the lost weight and gained even more.”

From there, everything became a struggle, Luis gained so much weight and became so sedentary that even the simple things such as walking were a pain, “I could not travel because it did not fit in the seats it was also a problem to go to eat somewhere because I did not fit in the chairs, it was not easy to get clothes of my size because I reached a size 50 waist. In Addition to that I had also undergone surgery on one of my legs due to a complication brought by poor circulation in one of my legs”.

Luis’ health was suffering and reaching a sensitive point where change was the only option. Seeing those obstacles drove him to take action and turn the tables. He had heard, by his then girlfriend, that an acquaintance had been losing weight with an innovative plan: coffee and shakes. Having tried everything, at the beginning of 2018 he decided to give this a chance, once again, there was nothing to lose.

“I started the weight loss program with 278 pounds… I was amazed, not in a good way, at the number. The last time I weighed myself I was on 158. I was putting my life at risk, I could barely breathe, even when I wasn’t moving a single limb. Things needed to change.” His partner by that time was his biggest supporter and encouraged him to take the ORGANO FENIX shakes every day, complemented by healthy meals.

“During the first 4 months I lost 40 pounds without any exercise, just eating healthy, having my OG coffee and replacing two meals with my Fenix shakes. After that I started doing some daily cardio, such as walking or biking for an hour and a half,” he explained. He loved the convenience of the shakes since he could prepare them anywhere and he could customize different recipes to give variety to his days. The changes kept on happening, by the end of 2018 he had lost 70 pounds and he was gaining some mobility and feeling much more energized and vital.

“In march 2019 I decided to join the X-Challenge, inspired by Robert Becerra. I incorporated the fitness routines and a more consistent consumption of the OGX supplements to be in better condition.” Luis lost 100 pounds and by May he was invited to share his amazing story in Guadalajara. “It was my first time flying on a plane in 30 years, I felt comfortable, I could fit in my seat, I was over the moon.”

From then, he started attending several ORGANO events to share his testimony, inspiring others to experience the transformation and search for a healthier, more balanced lifestyle, without starving or feeling tired all the time. “I’ve gained muscle mass, I feel more vital, I made friends for life and I’ve had the chance to meet incredible leaders and speakers. I’m a firm believer that you can achieve big things if you really commit to them.”

Since then, Luis has become an OG ambassador, sharing his experience, still committed to losing more weight and inspiring others to take the X-challenge.

Congratulations to our 48hr Special winners: The t

📣The limited edition Ceramic Dream Mug is back